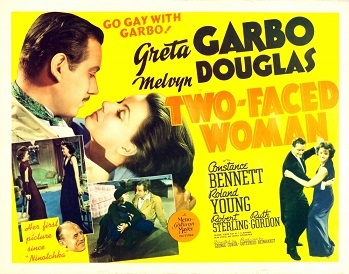 Two-Faced Woman is a 1941 romantic comedy starring Greta Garbo (in her last film role), Constance Bennett, and Melvyn Douglas. It was directed by George Cukor and had three screenwriters.

It stars magazine editor Larry Blake (Douglas), who is on vacation at a ski resort in Idaho. He shows no interest in the sport until he spots the beautiful ski instructor Karin (Garbo) and asks her for private lessons. They slowly start to get along and after being snowed in together, Larry's panicked secretary Miss Ellis (Ruth Gordon) and friend Mr. Miller (Roland Young) discover that Larry is fine and married to his skiing teacher.

The newlyweds appear to be an idyllic romantic couple but cracks start to show immediately when Larry is wanted back in New York. They bicker through the night and into the next morning with Karin accusing Larry of being two-faced. Offended, Larry promises her that he will return to her when his business trip is done as he leaves their home.

Soon after Larry is back in New York, Karin tells Miss Ellis through a telegram that she wants to surprise him. When she sneaks into a Broadway rehearsal he's watching, Karin notices how much her husband gets along with his colleague Griselda Vaughn (Bennett) and decides to leave, but as she and Miss Ellis try to sneak out, they are caught by Mr Miller. In a blind panic, they tell him that Karin is actually Katherine — Karin's outgoing and flirtatious identical twin sister, who intends to seek out what her twin sees in her brother-in-law Larry Blake.