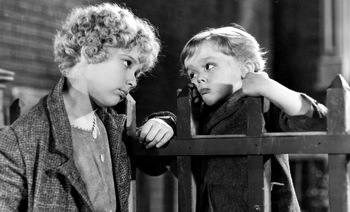 It's a hard-knock life for Annie and her toddler friend Mickey. Except she doesn't burst into a cacophonous "Tomorrow".
Advertisement:

Whenever people think of Annie, they think of either the 1977 musical, the 1982 film adaptation or the oft-criticised 2014 modern-day reboot. And then there's this obscure-yet-seminal 1932 Pre-Code comedy-drama based on the Little Orphan Annie comic strips, directed by John S. Robertson, written by Wanda Tuchock and Tom McNamara and released by RKO Pictures.

Daddy Warbucks (Edgar Kennedy) falls victim to The Great Depression, and is forced to abandon his adopted daughter Annie (Mitzi Green) so he could mine for gold and eventually reclaim his fortune. Meanwhile, Annie takes in a ward of her own — an orphan toddler named Michael (Buster Phelps).