Film / The Legend of Bagger Vance 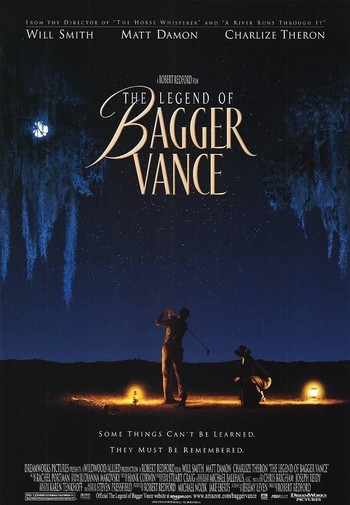 The Legend of Bagger Vance is a 2000 film, based on a 1995 book, directed by Robert Redford, and starring Will Smith, Matt Damon, and Charlize Theron, about a golf match in the 1930s and one golfer's struggle to overcome his past.

In 1931 a major golf tournament is scheduled in the town of Savannah, Georgia, between the greatest golfers of the day: Bobby Jones (Joel Gretsch), Walter Hagen (Bruce McGill), and Rannulf Junuh (Damon). While Jones and Hagen are both at the top of their game, Junuh has many unresolved issues that hinder his performance. With the help of his caddy Bagger Vance (Smith), former girlfriend Adele Invergordon (Theron), and young Hardy Greaves (J. Michael Moncrief), Junuh must overcome his demons and find his swing if he is to have a chance of winning the tournament.