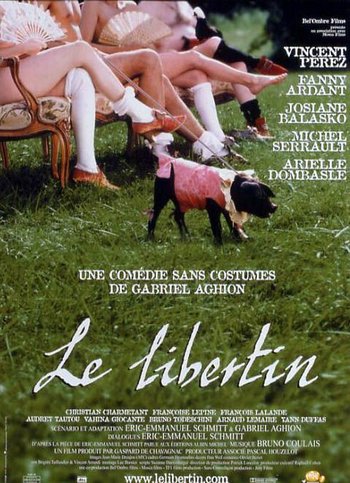 In the 18th century, the philosopher Denis Diderot

(Vincent Perez) is hard at work writing and printing his Encyclopédie

. Due to the Church banning the work, he runs the operation clandestinely in an abandoned chapel in the not-all-there Baron of Holbach's estate, with its eccentric and liberal inhabitants, led by the Baron's wife (Josiane Balasko), doing their best to protect Diderot. In the course of a few days, the Holbach chateau is visited by the painter Madame Therbouche (Fanny Ardant), invited to create a portrait of Diderot, and the Baron's brother, the Cardinal (Michel Serrault), who strongly disapproves of Diderot and the whole Enlightenment business. Hilarity Ensues as everyone tries to keep the Cardinal in the dark about the (very noisy) printing operation.

Also features a pre-Amélie Audrey Tautou in a relatively small part as the Holbachs' daughter.

Has nothing to do with 2004's The Libertine.

The Libertine'' provides examples of: