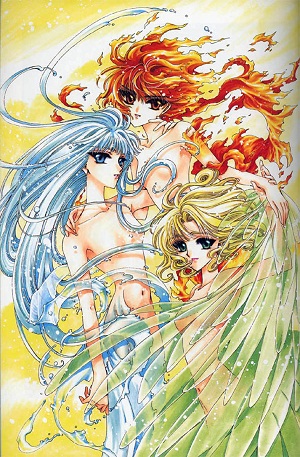 "A way out here, they've got a name
for wind and rain and fire
The rain is Tess, the fire is Joe
and they call the wind Maria."
— "They Call The Wind Maria", Paint Your Wagon
Advertisement:

Often in works with Elemental Powers, Earth gets left out, and the Four-Element Ensemble becomes a trinity of Fire, Water, and Wind.

There are several reasons why this is. Earth may not be considered as flashy or might be considered too similar to physical damage. It may also be a product of real-world beliefs; in Elementalism, the element of Earth is closely tied in with worldly desires such as wealth, prosperity, and power. As such, some writers may not feel that it is an appropriate powerset to give to a heroic character. Sometimes writers will fold Earth into one of the other elements, most often Fire (through volcanoes and deserts), but it sometimes gets grouped with Wind (through grass and sand).

The important thing to remember is that unlike its more common Sister Trope, Fire, Ice, Lightning, here ice magic is NOT water and the element of air is represented by wind, not electricity.

See also Elemental Powers, Playing with Fire, Making a Splash, and Blow You Away, as well as Fire/Water Juxtaposition.

If it overlaps with Land, Sea, Sky, the part of Land will be played by Fire, as represented by volcanoes or deserts.

Can also be an example of Chromatic Arrangement, when Fire Is Red, Water Is Blue, and Wind Is Green.