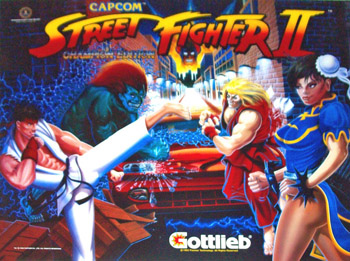 You idiots! These are not them! You've captured their stunt doubles!
"Prepare, for the ultimate challenge!"
Advertisement:

Street Fighter II is an arcade pinball machine released by Gottlieb in 1993, a Pinball Spin-Off of the video fighting game. It was designed by Ray Tanzer and Jon Norris, with art by David Moore and Constantino and Jeanine Mitchell.

The Street Fighter II pinball casts the player as a new challenger in the tournament, who must defeat each of the twelve opponents by making the appropriate shot when that opponent's light is lit. Along the way are various ancillary challenges, such as fighting off ninja attacks, participating in several multiball modes, and crunching the sports car beneath the playfield. Defeat all twelve fighters, and you will enter the Champion Challenge — if you can defeat all of the fighters again, you will be recognized as the new Master (along with numerous points and bonuses).

Not surprisingly, the Street Fighter II pinball rode the popularity of the license to become one of Premier's top-selling games, with over 5,500 tables sold. But although the game has a fair number of challenging shots, it failed to catch on with many players, who were turned off by its stop-and-go gameplay, sparse lower playfield, and unbalanced design.

The one thing that everyone agrees with, however, is the unappealing backbox art, which doesn't do any favors for the iconic World Warriors, and left Chun Li resembling a Bruce Lee Clone Disguised in Drag. The display animations are equally infamous for their low quality, as they appear to be ripped from the actual game — and poorly at that. One can only assume that the art budget for this game was eaten up by the licensing costs for Capcom.