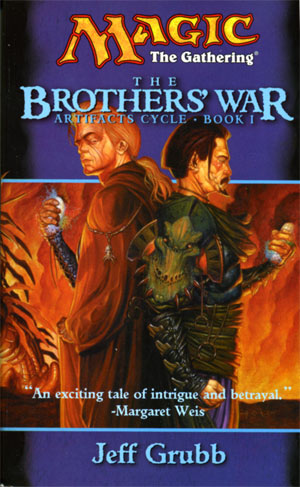 .
"The Myth. The Magic. Dominarian legends speak of a mighty conflict, obscured by the mists of history. Of a conflict between the brothers Urza and Mishra for supremacy on the continent of Terisiare. Of titantic engines that scarred and twisted the very planet. Of a final battle that sank continents and shook the skies. The saga of the Brothers' War."
Advertisement:

The Brothers' War by Jeff Grubb is the first post-revision Magic: The Gathering novel.

Urza's saga is continued in Planeswalker.

The Brothers' War provides examples of the following tropes: