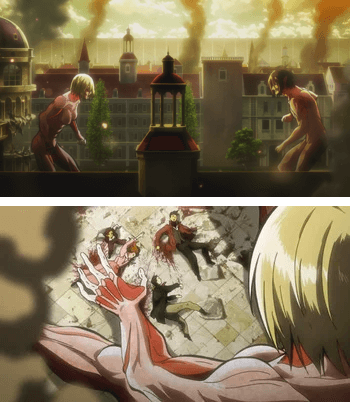 This is it! The moment of truth! The heroes and the villains are duking it out in the midst of the flames, the Big Badass Battle Sequence between the armies of good and evil has begun, it's time to let the audience see how Badass each character can be and shine the Crowning Moments Of Awesome.

That is, so long as we keep the camera on the battle.

If the camera turns instead to the civilians near the action, you'll probably see more than one injured or dead person, people struggling to get out of the debris, children crying, houses and buildings burning.

This is what is called the Bystander Action-Horror Dissonance, when an action scene is also Played for Horror when the narrative switches to the victims of an attack or conflict. This type of shot is used as a way to either showcase how dire the situation is, make an action series much more serious or to portray with greater realism what those big battles actually entail.

At its core, this trope's shock value relies on an indirect instance of The Fourth Wall Will Not Protect You, in this case by making the spectator connect himself or herself not with the hero or heroes but with the common folk at ground zero, in turn making it clear to the audience that were they in the setting, they would most likely be victims.

The shock value also differs from each genre, as audiences are somewhat aware of what is in store for them in a movie by looking up at its basic premise - unless of course the director intends to pull the rug on the audience from the start -, thus, a Kaiju or Disaster Movie typically won't have the same shock as a Comic Book Film would have in theory.

This trope leans towards the cynical side of the Sliding Scale of Idealism vs. Cynicism, and can serve as a justification for the Anti-Hero to not fight fair and get to the villain as quickly and clean as possible, after all, when there are lives on the line, all bets are off.

That said, it's also valid to have The Cape justify how he or she acts precisely to avoid scaring the civilians, showing that the hero can be inspiring and responsible.

Compare with Violence Is Disturbing, when violence - even the "heroic" kind - is portrayed as horrifying even without bystanders involved; Mook Horror Show, in which case the ones at the end of the terror reel are combatants who are woefully outclassed against their enemies; and with Spectator Casualty, which is when those who want to see the fight end up harmed or dead for being close to the action. Also related to Deadline News as a news reporter will also suffer at the end of the collateral damage, and Inferred Holocaust, which is when lethal damage is done on an area but is not explored within the story.

Contrast with Conveniently Empty Building, which is when buildings are explicitly mentioned to be devoid of people, and thus safe to destroy (disregarding of course the amount of people who could end up homeless now); No Endor Holocaust, in which Word of God has to step in to make it clear that there were no collateral casualties; and Hero Insurance, by which the hero has a permission to cause property damage because of his profession.