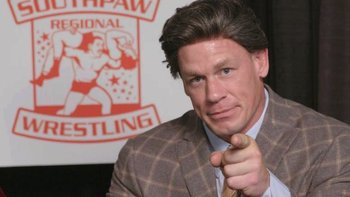 On February 29, 2020, ironically enough, a third season was announced to be released in the summer, which would be set in the mid 90s ('94 to be exact). However due to the COVID-19 Pandemic and WWE releasing several stars, many who are key characters to the series,note The teaser implied that it would be centered on Chett, whose actor Fandango was among those released. no other announcement has been made in regards to this series.

This video series contains examples of: