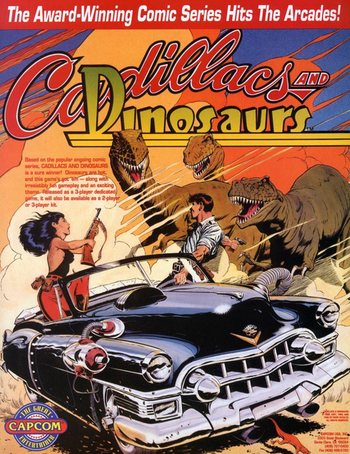 Cadillacs and Dinosaurs (1993) is Capcom's arcade beat 'em up based on the comic series Xenozoic Tales (though it more leans toward its animated series, which shares the name). The game roughly follows the source material's plot: Taking place 500 years from the 20th century, an ensemble gang called the Black Marketeers begin hunting the dinosaurs to serve their unknown purpose. It's up to Jack Tenrec, Hannah Dundee, Mustapha Cairo, and Mess O'Bradovich stand up against the evil deeds of the Black Marketeers.
Advertisement:

It has nothing to do with Sega CD game Cadillacs and Dinosaurs: The Second Cataclysm, which was FMV-based shooting gallery game.

Cadillacs and Dinosaurs contains examples of: