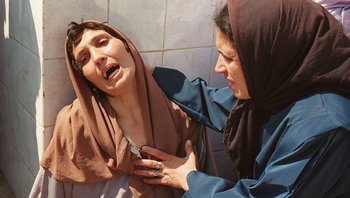 The famous photo of a woman who passed out after hearing that several members of her family were killed in the Bentalha massacre, September 23, 1997.
Advertisement:

Regarded as Algeria's own "Dirty War", this armed conflict taking place during much of The '90s occurred between the Algerian government and several Islamic terrorist groups shortly after a military coup prevented the presidential elections. It was one of the early contemporary conflicts involving Islamic terrorism coinciding with The Chechnya Wars that preceded The War on Terror, and was also marked by brutality, unrelenting fanaticism and the targeting of intellectuals.

Since Algeria won its independence from France after being a colony since the 19th Century, Algeria became a one-party state dictatorship governed by the National Liberation Front or FLN note French for Front de libération nationale, which was anti-imperialist, nationalist and relatively secular, but also riddled with corruption and ineptitude. During The '80s, an economic crisis took place as a population explosion and inability to supply houses, jobs and food led to stagnation and poverty. Populist protests took place all over the country demanding greater political freedoms and elections, which pressured the FLN to give in by 1988. In the backdrop of the Iranian Revolution in 1979 which turned it's monarchy into a theocratic regime, a lot of people began turning to Islamism as an ideology rather than nationalism and socialism. This paved the way for the Islamic Salvation Front or FIS note Fronte de Islamique salvation, an Islamist political party whose aim was to turn Algeria into a fundamentalist state via democratic means.

This group quickly garnered enough approval from the population, especially the poor, less educated youth, from their charity and rallies that they won the 1990 local elections and gained control of districts where they imposed headscarves on female public employees, closed down bars and video stores, and changed satellite dishes to receive Saudi TV broadcasts rather than European ones. Even though Algeria is a Muslim-majority country, it was fairly Westernized and followed modernist interpretations of Islam that allowed emancipation of women and worked through secular institutions rather than the extremist ones promoted by the FIS, whose policies alarmed non-Islamists citizens (particularly feminists, secularists, the Christian minority and the French-speaking middle class) and it didn't help that FIS leaders Ali Benhadj and Abbassi Madani were not truly committed to democracy, only seeing it as a means to an end and vocally calling for the deaths of anyone guilty of sedition. At the same time, several Algerian volunteers from the war in Afghanistan returned home galvanized by the Soviet defeat and implementation of an Islamic regime in Afghanistan. They were eager to replicate the same thing in their home.

As the elections were approaching, there were fears both inside and outside of Algeria about what an Islamic government would entail for the country, as then-President Chadil Bendjedid famously declared, "Algeria cannot become another Iran". Feeling that their own existence could be threatened, the Algerian army stepped in to force serving president Bendjedid to resign and cancelled the elections at the last minute (which would have resulted in an FIS victory). The FIS party was outlawed and their leaders were arrested, as well as anyone associated or even suspected to be with the group - even long bearded men were arbitrarily jailed due to the Islamist tradition to wear beards, which marked them as possible FIS members. A junta was established when Bendjedid's replacement Mohamed Boudiaf was assassinated by his own bodyguard (who was swiftly executed). Any Islamist who managed to escape took to the deserts where they took this as a declaration of war.

With the FIS leaders behind bars and the Islamist opposition disunited, it led to the proliferation of radical splinter groups, with the most infamous one being the Armed Islamic Group or GIAnote Groupe Islamique Armé, founded by the aforementioned jihadist veterans from Afghanistan and composed primarily of the angry, poor urban youths. These militants were characterized by extremism incomparable to others, declaring that "pluralism is akin to sedition", opposing negotiation with the enemy and declaring any Islamist willing to do so as "not Islamic enough". Unlike other insurgents led by veterans of the War of Independence who favored targeting the military and government officials, the GIA was notorious for going after civilian targets such as journalists, medical doctors and teachers for being perceived as "French foreigners", unveiled women and female students because the militants thought "girls shouldn't be studying", and artists and singers like Cheb Hasni and Lounes Matoub were murdered for making songs about taboo subjects which angered the terrorists. Their end goal was to cause a complete and total collapse of civil society so they could establish their own Islamic state and their motto was "those that fight us by the pen will die by the sword".

This conflict was not contained to Algeria either, as it spilled out to France (because of their support for the FLN), with GIA-affiliated terrorists carrying out bombings in Paris and one plane hijacking attempt to crash it into the Eiffel Tower to pressure the French into abandoning the regime and hasten their demise. During this time, the GIA was not only in conflict with the FLN, but also other Islamist groups, declaring that anyone who didn't join them were "apostates". The GIA relied solely on terror and was unwilling to compromise to anything since "political plurality is akin to sedition" in their view. The apogee of the barbarity came in 1997 when they began a series of massacres during Ramadan that continued unabated for months, which became too much for the insurgents and exhausted any support they might have had - even foreign Islamists turned their backs to the GIA. This marks the end of "organized jihad", as the GIA became less effective as an fighting force and were reduced to little more than bandits.

Pacification began with the election of Abdelaziz Bouteflika, who promised amnesty to any GIA members not guilty of murder or rape if they surrendered themselves to the government. Although this measure was highly criticized by the public and factions in the army for giving a free pass to terrorists, it was aimed at dividing the GIA into those tired of fighting that wanted to come back to a normal life and those that were too consumed by the violence to be reasoned with. The GIA was deserted in droves, while those too radicalized to stand down were taken out by army operations and swiftly dismantled. The events of 9/11 increased the United States' sympathy for the Algerian efforts to fight terrorism and boosted their efforts.

Debates remain to this day on how much the atrocities carried out by GIA were actually done by them: some allege that the 1998 massacres were actually done by Algerian security forces and they pinned the blame on GIA - even some GIA militants accused each other of being FLN spies trying to undermine their group from within. This is contradicted by the testimonies of survivors from the massacres who saw the attackers unmasked and recognized them as former FIS members. Reports by Human Rights Watch observe that the army barracks were stationed near the villages, but they did nothing to stop the killings. Then again, many dismiss these as conspiracy theories propped by FIS and their sympathizers to distance themselves from the counter-productive effects of militant activity.

In any event, the GIA's decline in 2002 marks the official end of the war even though terrorist activity would persist as militants would form the Al-Qaeda branch in the Maghreb region. The efforts to collapse the Algerian state were now over. Despite still remaining an undemocratic and very corrupt one-party state, the FLN avoided many mistakes that the Shah in Iran and the Communists in Afghanistan made that led to their governments being overthrown by fundamentalists, like keeping the army and the secular, educated middle-class on their side rather than alienating them. Traumatized by the GIA atrocities, the public feared an Islamist takeover far more than they hated the FLN's corruption, which certainly helped secure and strengthen their position over them for the foreseeable future.

The war was a major blow to Islamism as an ideology - it's thought that an Islamist takeover of Algeria likely would have had serious consequences for the region and likely would have to it's neighbors. On a related note, Iran's support for the militants alienated Algeria, who once stood by it's side during the Iranian hostage crisis and ultimately led to Algeria transferring it's position as protecting superpower to Pakistan. But most importantly, FIS activists and leaders released from jail were back to square one, since those who initially backed them came to loathe living in Islamist-controlled areas where they were extorted by thuggish jihadists. As such, much time was spent by Islamists to distance themselves from the violence (usually by accusing the FLN of being the real perpetrators). This is the main reason why Algeria kept its regime in place when The Arab Spring emerged, as the Algerians were not willing to endure anything similar like that again until 2019 when Bouteflika was forced to step down. Time will tell if these events will be replicated...