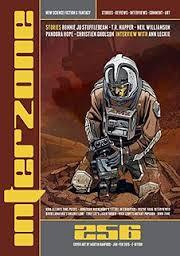 Interzone is a British science fiction magazine, started in 1982 and still in regular publication as of 2015, passing issue #260 that year. (That makes it Britain's longest-running SF magazine by a good margin.) Although it is technically classified as a "semi-prozine", and has won a Hugo Award in that category, it has a fully professional style of presentation, and has published stories by any number of big-name professional writers. Likewise, although as a British magazine it features mostly work by British authors, it has also published stories by American, Australian, and other writers, such as Greg Egan (something of an Interzone discovery — one of many) and David Brin. David Langford contributes a regular column.

The magazine naturally has its own Web site

Tropes associated with Interzone include: