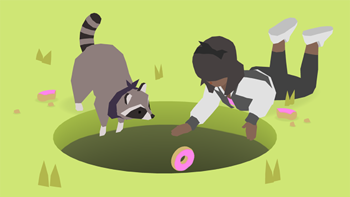 So, it all starts as a normal day in Donut County. The sun's shining, the neighbor's honking their head off as usual, and Mira's texting her best raccoon buddy/co-worker, BK, all about it. BK, wishing she'd come into work at the Donut County donut shop located in Donut County sooner, decides to deliver the neighbor a donut.

Then the honking stops.

Cut to six weeks later and the whole County's stuck in a cavern nine-hundred-and-ninety-nine feet underground. Turns out BK's been sucking everyone and everything down remote-controlled sink-holes using a tablet app under the guise of the donut shop's delivery app. Apparently, the raccoons have been staging a covert invasion to acquire non-raccoon-kinds vast quantities of "trash" (read: everything man-made that isn't nailed down... and everything that is!). Admittedly, BK didn't really know what he was doing, he just wanted a shiny new quadcopter. So now it's up to Mira, BK, and the rest of Donut County's colorful denizens to find a way out of the holes, turn the tables on the Raccoons, and get their town back. And maybe get BK to admit that, yes, this is totally his fault.

Donut County is an indie puzzle game developed by Ben Esposito and published by Annapurna Interactive, that kind of plays like a reversed Katamari Damacy. You start by deploying the hole and moving it around to collect small objects (rocks, cell phones, bugs, etc.) with each object increasing the circumference of the hole until you're horking down whole high-rises. The premise starts simply until you need to manipulate specific types of objects (water, fire, fireworks, etc.) to break things down into manageable pieces.