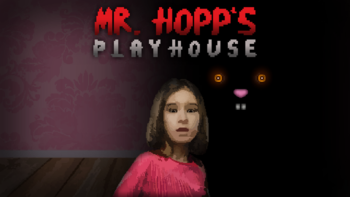 "Every kid has that one toy that scares them. Imagine if it came to life."

Released on October 7th, 2019, you play as a girl named Ruby, who is unnerved by the stuffed rabbit (which her Nana Esther made for her) that sits on a stool. One night, she gets out of her bed and goes off to find her parents, unaware that she's in danger...

The game's mechanics are inspired by Lasagna Boy by Trashy Rascal Studios.

The game can be found on itch.io

A sequel called One Hour With Mr. Hopp was created for Halloween 2019, and another sequel called Mr. Hopp's Playhouse 2 is currently in development

with a tentative release date on Easter 2021. The teaser can be seen here