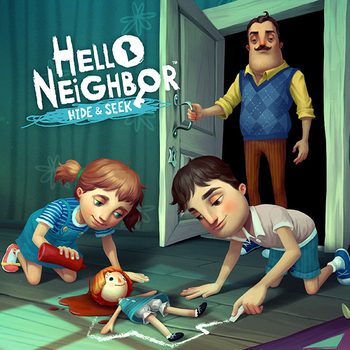 Hello Neighbor: Hide & Seek is a Stealth Puzzle Game released on December 7, 2018. A prequel to the first game, Hide & Seek details the events that lead up to the neighbor's strange and unusual behavior.

The game begins with the neighbor's children playing, well...hide and seek. You take control of the daughter. In each level your goal is to find and collect a certain number of objects, all while solving puzzles and avoiding getting caught by your brother. Each stage takes place in the kids' imagination, resulting in some very weird locations to hide in and explore.

The game is notable for its sudden mood shift from bright and happy, to bleak and depressing. It's definitely not the game to play if you're looking for something to cheer you up.

The game is made available for PC, iOS, PlayStation 4, Xbox One, and Nintendo Switch.