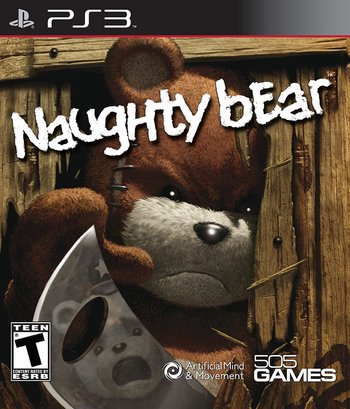 Naughty Bear is an action game for the Xbox 360 and PlayStation 3 about Naughty Bear, a teddy bear who is very naughty. There's a birthday party on the Island of Perfection, and Naughty is not invited. Upset by this, he decides to exact revenge on everyone on the island by scaring the fluff out of them and/or killing them.

This game features many ways to dispatch your fellow teddy brethren. To earn "Naughty points," you perform various naughty actions, such as sabotaging powerboxes, destroying the environment, and scaring the locals. The objective of the game is to cause as much chaos as possible, increasing the score multiplier.

The game was later given a sequel titled Naughty Bear: Panic in Paradise, taking place on an island resort but still having the same basic premise.