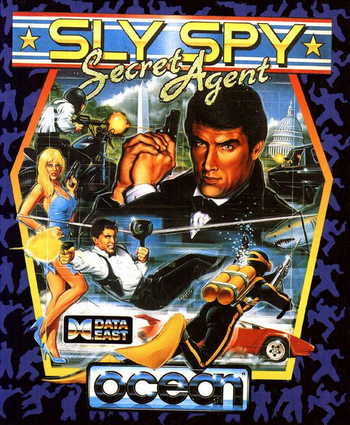 Sly Spy, alias Secret Agent, is a 1989 action Arcade Game by Data East inspired by popular works of Spy Fiction. The player takes control of an agent with a three-digit code name, who shoots through nine stages to save his country (the U.S.A., not England) from the terroristic menace known as the Council for World Domination.
Advertisement:

Conversions of the game for the Amiga, Atari ST, Commodore 64, Amstrad CPC and ZX Spectrum were developed by Software Creations and released by Ocean Software.