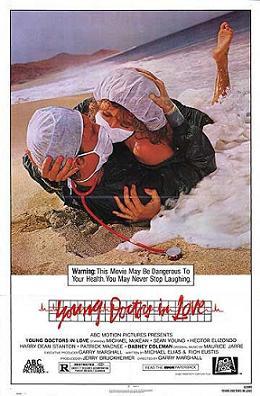 Where have I seen this before?note No, not there.
Advertisement:

Young Doctors in Love is a 1982 Screwball Comedy directed by Garry Marshall. Essentially Airplane! IN A HOSPITAL, the film is largely a parody of medical dramas and soap operas; what the Zucker-Abrahams-Zucker team did to airport dramas, this film does to General Hospital.

It tells the story of a group of doctors fresh out of school working in a rather chaotic hospital. Several common plots of medical soap operas are present: multiple sets of lovebirds, Mafia patients, doctors abusing drugs, the hospital facing bankrupcy, protagonist's Love Interest being terminally ill, as well as unconnected plotlines which last anywhere from the whole movie to a few seconds, with a few running gags (namely, a bed that refuses to be fixed) for good measure. Think one really long episode of a long-running drama turned on its head and where everything is resolved in 90 minutes.

The movie was a dud at the box office, with most critics making unfavorable comparisons to Airplane!, but has gained a steady cult following ever since.

There were no laser beam effects used in this film.