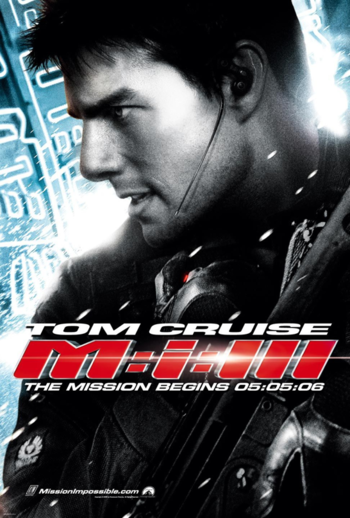 "Welcome back, brother."
"You have a wife, girlfriend? Because you know what I'm gonna do next? I'm gonna find her, whoever she is, I'm gonna find her and I'm gonna hurt her. I'm gonna make her bleed, and cry, and call out your name, and you're not going to be able to do shit, you know why? 'Cause you're gonna be this close to dead. And then I'm gonna kill you right in front of her."
—Owen Davian (while captive)
Advertisement:

Ethan is in semi-retirement, only training new agents, and is engaged to Julia Meade (Michelle Monaghan), a nurse who thinks he works for the Virginia Department of Transportation. He is convinced to come out of retirement when he learns that one of his students has been captured. After the simultaneous success and failure of that mission, he takes over the student's case: tracking down the whereabouts of an elusive arms dealer named Owen Davian (Philip Seymour Hoffman), who is looking for an unspecified item known as the "Rabbits Foot."

The big-screen directing debut of J. J. Abrams (who also co-scripted and did a bit of digital work), this film falls back to cloak-and-dagger tricks, with the action being more through time-frame constrictions or compromised missions, and even takes time to develop its characters. Though not intended to be so, it's also a Soft Reboot of the film canon — it's worth noting that the next film, Ghost Protocol, doubles the number of reappearing characters — which might explain why Abrams has since been entrusted with relaunching two more major franchises.

The IMF tries to detain "rogue" agent Ethan Hunt, who manages to escape custody after a friend hands him a knife.

The IMF tries to detain "rogue" agent Ethan Hunt, who manages to escape custody after a friend hands him a knife.