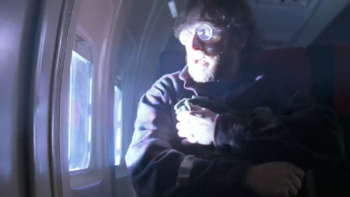 "You're saying the man sitting in seat thirteen-F was abducted mid-flight without any depressurisation of the cabin, without any effect on the plane."
Written by Chris Carter & Frank Spotnitz
Directed by Kim Manners
"Max is the key to all this. He knew that plane was in danger even before it took off, before it entered military airspace. How would he know that? And what would be worth taking that risk?"
— Fox Mulder
Advertisement:

Mulder and Scully continue their investigation of the plane crash and Max Fenig's death.

"I intend to expose these facts to the people. I mean, I'm just one man..."