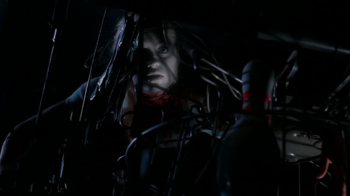 "It was speaking to him as if she was trying to tell him something. It sounds more like a death omen."
Written by John Shiban
Directed by James Charleston
Mulder: I'm sure Harold Spuller is the man that made that phone call. But what led us to him still remains unexplained.
Scully: "She is me".
Mulder: Uh huh, and the other apparitions, like the one Mr. Pintero saw at the bowling alley.
Advertisement:

Mulder and Scully investigate a series of murders in which the victims appeared somewhere else as Monochrome Apparitions as they were killed.

"I know what you're afraid of. I'm afraid of the same thing."