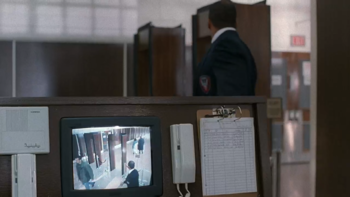 Spot the difference. Give up? Look at the bottom left of the screen.
Written by Howard Gordon (Story & teleplay) & Chris Carter (Teleplay)
Directed by Michael Lange
"Name's Nathaniel Teager. 26 confirmed solo enemy kills. A veritable killing machine. Left for dead by the same government that created him."
— Denny Markham
Advertisement:

Mulder and Scully hunt an invisible assassin (Peter LaCroix) targeting military officials, in the process stumbling across a government cover up pertaining to Vietnam POW's.

Advertisement:
Skinner: You found the man you were looking for, but now he's dead, it's over.
Mulder: Is that what you believe? Is that what you really believe? They're not just denying this man's life, they're denying his death. And with all due respect sir, he could be you.