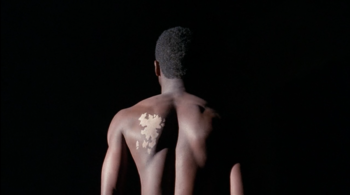 "Only when the sun fell, when the rest of the world was sleeping, would they come out."
Written by Howard Gordon
Directed by James Charleston
Minister Diabira: I grew up hearing the old stories, believing them as only a child can believe.
Mulder: What kinds of stories?
Minister Diabira: The Teliko... spirits... of the air.
Advertisement:

Mulder and Scully investigate after several African men are found dead, with their skins bleached white.

"But what science may never be able to explain is our ineffable fear of the alien among us; a fear which often drives us not to search for understanding, but to deceive, inveigle, and obfuscate."