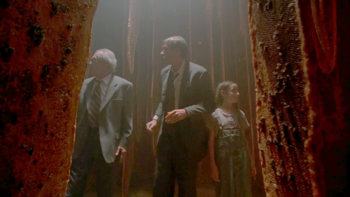 "Everything dies!"
Written by Chris Carter
Directed by R. W. Goodwin
Jeremiah: You have to understand something. I must perish. Whatever the consequences to that end, they are incalculable to the preservation of the larger plan.
Mulder: The larger plan? You mean colonization.
Jeremiah: Hegemony, Mister Mulder. A new origin of species.
Advertisement:

Pursued by the unstoppable Alien Bounty Hunter, Jeremiah Smith takes Mulder to see a secret Syndicate project with a population of child clones.

"You see... the fiercest enemy is the man who has nothing left to lose."