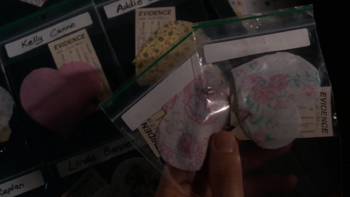 "Let's identify this girl so we can put her to rest."
Written by Vince Gilligan
Directed by Rob Bowman
"It was a difficult case, he was extremely hard to catch. By 1990, ten victims had been found scattered across the eastern seaboard. The earliest dated back to 1979. V.I.C.A.P. named the case "paper hearts" because of the trophies the killer took."
— Fox Mulder
Advertisement:

A pedophile serial killer (Tom Noonan) who Mulder helped catch years ago is discovered to have had more victims than was known at the time, and the possibility is raised that one of the unknown victims was Mulder's sister Samantha.

"Why don't you go on home and get some sleep?"