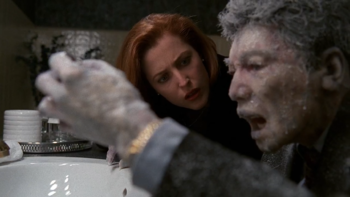 "The iceman cometh."
Written by Howard Gordon & David Greenwalt
Directed by James Charleston
Scully: Mulder, this is a photograph. It is a documented moment in time.
Mulder: In a future that somebody is trying like hell to prevent from happening.
Advertisement:

A man is arrested after apparently pushing his colleague in front of a bus, but claims he was actually trying to save him from that fate, which was predicted down to the exact time by a strange old man they met earlier.

Advertisement:
"Although multidimensionality suggests infinite outcomes in an infinite number of universes, each universe can produce only one outcome."