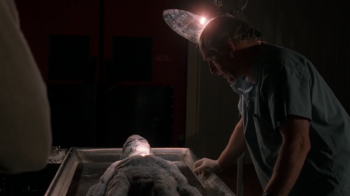 "You were only meant to see it, to make you believe the lie, so that you might finally commit and go public with the news."
Written by Chris Carter
Directed by R. W. Goodwin
"I come here today, four years later, to report on the illegitimacy of Agent Mulder's work. That it is my scientific opinion that he became over the course of these years a victim. A victim of his own false hopes and of his beliefs in the biggest of lies."
— Dana Scully
Advertisement:

An expedition in Northwestern Canada finds an alien body frozen in the ice. Scully and Mulder meet a man named Michael Kritschgau (John Finn) who claims that all the evidence of alien life Mulder has ever encountered has been faked as part of a conspiracy covering up terrestrial wrong-doing. The episode ends with Scully reporting that Mulder has been found dead by his own hand.

Advertisement:
"I think there's no question but that we live in an inhabited universe, that has life all over it."