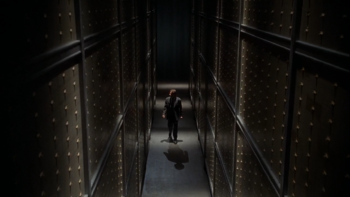 "All lies lead to the truth, isn't that right?"
Written by Chris Carter
Directed by R. W. Goodwin
"In four years, I have shared my partner's passionate search for the truth. And if my part has been a deception, I have never seen her integrity waver... or her honor compromised. But now, I ask her to lie, to the people that lied to us. A dangerous lie to find the truth. To find the men who would be revealed as its enemy... as OUR enemy. As the enemy within."
— Fox Mulder

Mulder's suicide is revealed to have been faked — the body Scully identified was actually an agent of the conspiracy who had been spying on Mulder. Scully seeks evidence that the conspiracy has agents within the FBI, while Mulder searches the Department of Defense Headquarters for the truth about aliens and Scully's condition.

"What I have here is proof undeniable... that the men who gave me this disease were also behind the hoax."