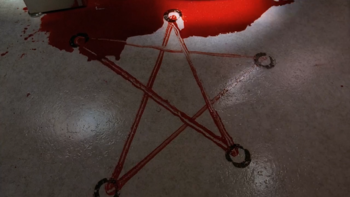 Yes, this symbol is one of protection. But if you watch this, prepare to grab a barf bag.
Written by Valerie Mayhew & Vivian Mayhew
Directed by Kim Manners
Dr. Franklyn: I don’t know how much of this you know, but uh, ten years ago there were several deaths at this hospital here in the ASU and like uh, the recent deaths they were all ruled accidental.
Mulder: Were any of you here at the time?
Dr. Franklyn: A few of us, yes, but .. more importantly ... there’s a nurse, Rebecca Waite. She was on the ward during those incidents.
Advertisement:

Mulder and Scully investigate a series of fatalities in a hospital's plastic surgery unit, each committed by a different doctor who claims to have no memory of the event.

Advertisement:
"I like to say whoever God didn’t get around to creating in his own image, it’s our job to recreate in ours."