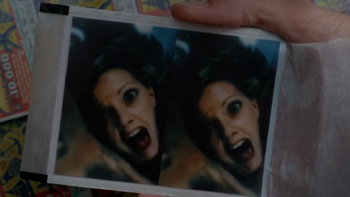 "An image like this would be a peek into that person's mind."
Written by Vince Gilligan
Directed by Rob Bowman
"Unruhe. Hab keine Angst. Ich verde dir helfen. Du wirst deine Unruhe bald vergessen... deine Unruhe vergessen." Translation "Unrest. Don't be afraid. I will help you. You will forget about your unrest soon... forget about your unrest" in German.
— Gerry Schnauz
Advertisement:

Mulder and Scully investigate a series of abductions in which the perpetrator (Pruitt Taylor Vince) leaves behind photographs of his victims surrounded by spectral images.

"For truly to pursue monsters, we must understand them. We must venture into their minds. Only in doing so, do we risk letting them venture into ours?"