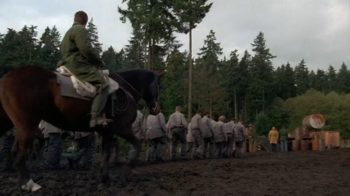 "E pur si muove" Translation "And still it moves" in Italian.
— Galileo
Written by Frank Spotnitz & Chris Carter
Directed by Rob Bowman
Mulder: You don’t tell me where that other bomb is and I’ll make sure you spend your prison time on your bigoted hands and knees putting a big smile on some convict’s face.
Mayhew: Sonofabitch stole it- truck and all. Some storage garage.
Mulder: Where?
Mayhew: Terma... North Dakota.
Advertisement:

Mulder attempts to escape from a Russian gulag where the prisoners are being subjected to experiments with the black oil.

"I am only here, Comrade, to congratulate you on a fine job."