The Field Where I Died 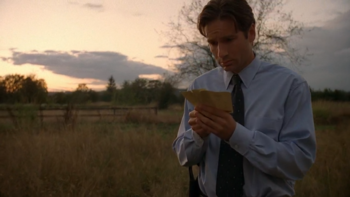 "The souls... come back together... different... but always together... again and again... to learn."
Written by Glen Morgan & James Wong
Directed by Rob Bowman
At times I almost dream
I too have spent a life the sages’ way,
And tread once more familiar paths. Perchance
I perished in an arrogant self-reliance
An age ago.
— Robert Browning, "Paracelsus"
Advertisement:

Investigation of a doomsday cult leader (Michael Massee) leads to déjà vu for Mulder and revelations about past lives, including his relationship through time to a member of the cult (Kristen Cloke).

And in that act a prayer
For one more chance went up so earnest, so
Instinct with better light let in by death,
That life was blotted out - not so completely
But scattered wrecks enough of it to remain,
Dim memories, as now, when seems once more
The goal in sight again.