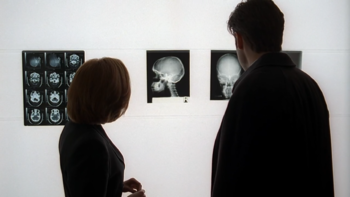 The countdown begins.
Written by Chris Carter, Vince Gilligan, John Shiban & Frank Spotnitz
Directed by Rob Bowman
"In med school, I learned that cancer arrives in the body unannounced, a dark stranger who takes up residence, turning it's new home against itself. This is the evil of cancer, that is starts as an invader, but soon becomes one with the invaded, forcing you to destroy it, but only at the risk of destroying yourself. It is science's demon possession. My treatment, science, has attempted exorcism."
— Dana Scully
Advertisement:

Scully comes to terms with her cancer diagnosis. Mulder investigates the possibility that it's linked to her abduction experience.

Skinner: There's always another way.
Cigarette Smoking Man: Yes I believe there is, if you're willing to pay the price.