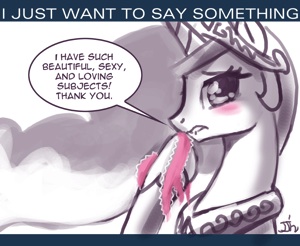 If "Ask Octavia" is the longest-running Ask a Pony blog, then Ask Princess Molestia (and Gamer Luna)

is one is the most (in)famous. Run by Brony community artist superstar John Joseco

, it follows the gag-a-day exploits of a very, very promiscuous, lilac-maned version of Princess Celestia. The blog was later extended to include her sister Luna, who here is a spirited gamer (and comparatively a prude).

in order to focus on his art, as well as his other webcomic, The Hunters of Salamanstra

The character of Gamer Luna is now being continued in her own (SFW) tumblr.

This is not to be confused with Ask Gamer Luna

Please refrain from discussing the circumstances (or lack thereof) surrounding the blog's takedown/closing.