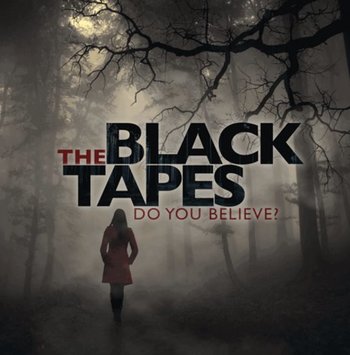 "Do you believe?"
Advertisement:

is a scripted podcast, following the exploits of journalist Alex Reagan as she talks with and researches the exploits of Dr. Richard Strand, an avid paranormal researcher and skeptic, on the handful of cases he has yet to debunk. The information on these cases are held in a series of black VHS cases, hence the podcast title, The Black Tapes.

Despite the series' ominous title, the show is not a traditional horror fiction podcast. While it does have its eerier moments, the show is more about the lives of investigators and their subjects, and how the strange events surrounding them—whether you believe them to be paranormal or not—affect those involved.

Also, they produce another podcast in the same universe called TANIS, starring Nic Silver, one of Alex's coworkers, as well as RABBITS.