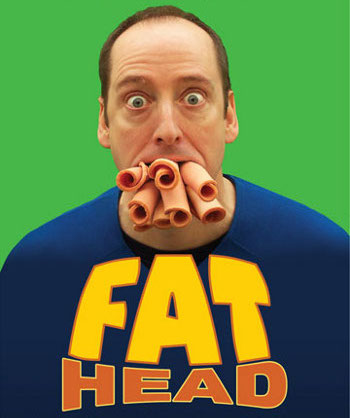 You've been fed a load of bologna.
Advertisement:

Fat Head is a 2009 documentary, created as a reply to the documentary Super Size Me.

In Super Size Me, director Morgan Spurlock ate at McDonald's three times a day, taking in five thousand calories per day and gaining weight as a result. Since eating five thousand calories a day of anything would make someone fat, comedian and former health writer Tom Naughton began wondering if it was possible to lose weight on a fast food diet. To this end, Naughton crafted a diet with three main points:

While it parodies and takes shots at Super Size Me in a few places, Fat Head largely goes in its own direction. The film looks at the science behind what makes a healthy diet, the political background to creating "certified healthy" foods, and the social stigma associated with those who are overweight.

, which delves deeper into how obesity became so rampant and Science for Smart People

, which goes into detail about good science versus junk science.