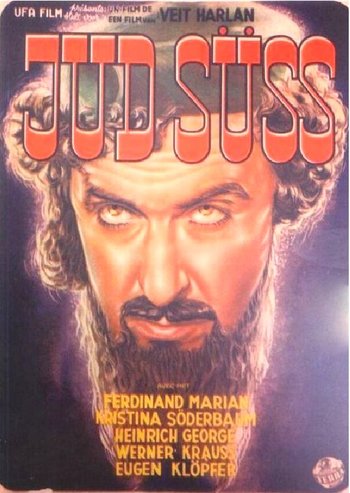 Jud Süß (Jew Süss) is a 1940 German Period Piece produced by Terra Film at the behest of Nazi Germany's Propaganda Minister Joseph Goebbels, directed by Veit Harlan and loosely based on the 1925 novel of the same name by Lion Feuchtwanger. It is one of the most (in-)famous antisemitic propaganda films ever made, and starred Ferdinand Marian, Kristina Söderbaum (Veit Harlan's wife), Werner Krauss and Heinrich George.

In the 18th century, Duke Karl Alexander of Württemberg begins his reign promising to rule with loyalty and honesty, but his cunning Jewish treasurer Josef Süss Oppenheimer corrupts him and enriches himself on the back of the citizens, causing them to complain and pushing Württemberg to the brink of civil war.

Accounts of the film's production are Shrouded in Myth, due to its notoriety and the later attempts of its cast and crew to distance themselves from it. Both Veit Harlan and Ferdinand Marian claimed that they were forced into making the film against their will, and that Goebbels micromanaged the production to the extent of ordering script rewrites and countermanding efforts by both director and actor to mitigate the film's antisemitism. In particular, Harlan recalled that he gave Oppenheimer a Motive Rant prior to his execution, but this was deemed unacceptable by Goebbels for humanizing its Jewish villain and excised from the finished film.

Whether Harlan, in particular, is reliable in his recollections about the film is debatable; after World War II he was tried for crimes against humanity and, though acquitted, he and Kristina Söderbaum were banned from working in film for over a decade. Marian's resentment is better documented; he was haunted by Jud Süß and ultimately Driven to Suicide by his participation several years later. Regardless, the film was a passion project for Goebbels, and Harlan would have been hard-pressed to disobey him even if he'd been so inclined.

The movie's direct impact on The Holocaust is undeniable. Upon its initial release during World War II, it caused antisemitic riots in Vienna and attacks on Jews in other cities across Europe. Conversely, theaters showing it in occupied Paris were bombed by the French Resistance. It was also shown to SS trainees during the war, and even screened for guards at Auschwitz and other concentration camps. Unsurprisingly, Jud Süß was banned in postwar Germany, Austria and several other countries and can only be screened there for educational purposes.

Should NOT be confused with the 1934 British film of the same name. Both are based on the same novel, but the 1934 film adapts the novel faithfully and actually condemns antisemitism.