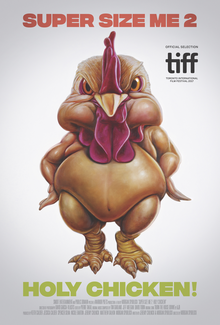 Big Chicken is watching you!
"My Dad always told me, 'If something seems too good to be true... it probably is.'"
— Morgan Spurlock
Advertisement:

Over a decade after his legendary McDonald's diet, Morgan Spurlock takes another shot at exposing the fast-food industry by turning his attention to the most popular item on the menu: chicken. This time around, Spurlock goes for a different approach to prove that contrary to popular belief, fast food hasn't gotten healthier despite claims from the big chains: he opens his own fast-food restaurant!

Super Size Me 2: Holy Chicken! follows the making of the titular eatery as Spurlock consults with marketing and health experts on how many fast-food restaurants manipulate their customers into thinking that the food they're eating is healthy, raises poultry himself with the help of a third-generation chicken farmer, crafts a chicken sandwich that's supposedly grilled and fried (grilled chicken is much healthier than fried chicken but not as popular), and reveals dark secrets surrounding the major chicken manufacturers, all leading up to a fast-food experience that is not really healthy but transparent and honest as hell.

And despite not being the central focus, Mickey D's is not off the hook as they are as guilty of deceiving customers as the other chains.

The film premiered at the 2017 Toronto International Film Festival (TIFF) to mixed-to-positive reviews but its release was derailed that December when Spurlock opened up to his history of sexual misconduct on Twitter. Despite these setbacks, the film was eventually released on September 6, 2019 for a limited theatrical run and it hit VOD a week later.

Tropes applying to this documentary are: