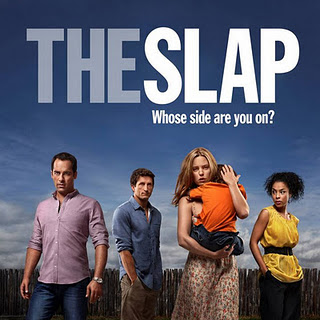 The Slap is a critically acclaimed novel written by Christos Tsiolkas in 2008, which was adapted by The ABC into a television mini-series in 2011 with an American adaptation aired by NBC in February 2015.

The story, set in the suburbs of Melbourne (New York in the American version), follows the lives of a group of people after they witness a man slapping someone else's child at a party. The single act is so divisive, that a family and life-long friends are torn apart by interwoven loyalties, and the result is not pretty.

The book has won or been shortlisted for numerous awards, including the Man Booker Prize 2010, and Commonwealth Writers Prize 2009 (in the latter case it won Best Book).

Not to be confused with a tie-in website to the Nickelodeon teen-comedy Victorious.