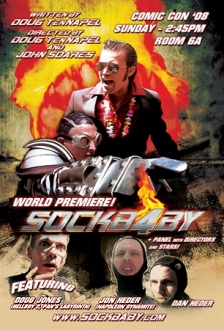 In a crazy suburban world, two friends - Ronnie Cordova, a kung-fu master in a maroon leisure suit and Burger, a cyborg in what appears to be a prison outfit with a rocket-powered robotic fist have somehow fallen into the task of caring for Sockbaby - a sentient sock. Who is actually the sock incarnation of Jesus, destined to die (again) for the sins of the Sock-People. When attempting to go get some lunch, Ronnie and Burger are assaulted by jive-talking demonic aliens...

It's as weird as it sounds. And it's awesome.

The fourth film in the series (Sockb4by) guest stars Doug Jones (with a cameo by Napoleon Dynamite in a wetsuit), gives us some more details of Ronnie's origin, and shatters the law that the fourth movie in a series is always horrible.