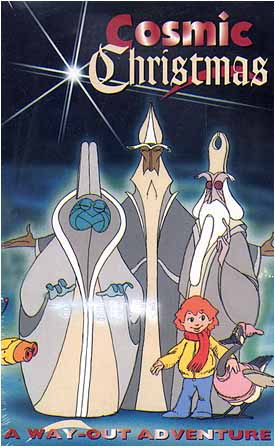 This Christmas Special, produced by Canadian animation company Nelvana in 1977 for CBC, is about a trio of scholarly aliens who land on Earth on Christmas Eve. They are met by a young boy - and his pet goose - and ask him about a great star that had revealed itself in this solar system 2000 years ago.

The boy must explain the meaning of Christmas, such as love and kindness to others, in the midst of a frantic city obsessed with consumerism which constantly contradicts him. But even when his goose is stolen by hungry street kids, the good kid risks himself to save their lives by trying to pull them out from an iced-over pond. His efforts are not enough, so the townspeople must interrupt their shopping sprees and come together to help them out. Even the three aliens are called-upon to aid them; after some hesitation, the aliens realize that the meaning of Christmas is helping others - as do the people of the town.

It's notable for being the very first animated production done by Nelvana. The special is available to watch on YouTube on the Retro Rerun channel here