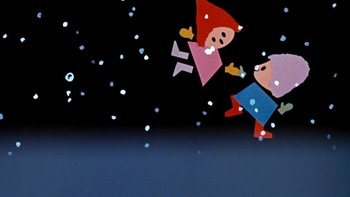 Christmas Cracker is a 1963 animated short film that despite being only nine minutes long needed four directors: Grant Munro, Jeff Hale, Gerald Potterton, and Norman Mc Laren. It was produced by the National Film Board of Canada.

It is three short bits of animation linked around the theme of Christmas. In the first, two cut-out animation figures dance to the tune of "Jingle Bells". (The characters as drawn rather strongly resemble how South Park drew Canadians 35 years or so later, which can't be a coincidence.) The second involves a bunch of Christmas toys (presumably they're Christmas toys, actually there isn't a clear connection to Christmas) running around fighting and racing and having a rodeo. The third, really the only one with a semblance of a plot, involves a man looking for a star for his Christmas tree. The three segments are linked by interludes where a cheerful clown introduces each in turn.

See it for yourself on the NFB's Youtube channel