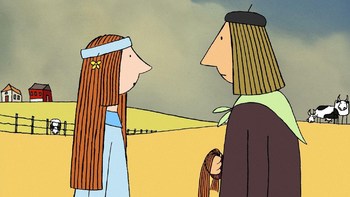 The Danish Poet is a 2006 animated short film by Torill Kove. It was an international co-production between Norway and the National Film Board of Canada.

In it a narrator (voiced by none other than Liv Ullmann herself) tells a fictional story of the random chance that brought her into existence. The tangled series of events that resulted in the narrator's birth began with Kasper, the eponymous Danish poet. Afflicted with a major case of writer's block, Kasper, on the advice of his shrink, decides to take a trip. Eventually he hits on the idea of taking a trip to Norway and visiting the author Sigrid Undset. Undset agrees to meet him, but fate intervenes, and Kasper winds up staying at a Norwegian farm—where romance blooms with the farmer's daughter, lovely Ingeborg.

See also My Grandmother Ironed the King's Shirts, another animated short made by Kove and co-produced by Norway and the NFB.