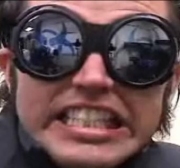 is the Vlog Series of the titular character, a fictional internet personality who frequently does webisodes with viral video star Brooke Brodack

Agamemnon is the Inarguable Eternal Leader of the glorious and superior Planet 3, where he has instituted his childhood utopian ideal of personal freedom (an oppressive, unchecked governing force known as the Vacuum Consortium). He had also begun to actively pursue his newest hobby, "collecting the universe". Presently, he is in the process of collecting Earth, to which he dispatched himself sometime in the last 3 decades in a scientific process too disgusting to mention.

In spite of his disgust with the Human race, Vacuum has occasionally made friends with certain like minded individuals such as Doctor Steel (who he met at an awkward supervillain mixer party in Burbank, California hosted by Bill Gates).

Videos in this channel contain examples of: