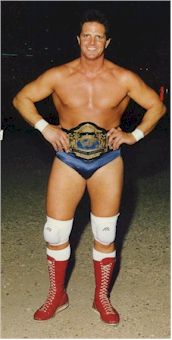 Christopher Adams (10 February 1955 – 7 October 2001) was a British professional wrestler, wrestling promoter and trainer, best known for his work in the 1980s as "Gentleman" Chris Adams.

He started his career in 1978 without any formal wrestling training, instead relying on his judo experience, as by age 21, he was a three-time British National Judo Champion in his age and weight classes. He first came to the U.S. in 1981 when he debuted in the NWA Hollywood Wrestling territory in Los Angeles. Along with his work in California, he also wrestled for the NWA Pacific Northwest Wrestling territory in Portland, Oregon, and did tours in Japan, Europe, Canada and Mexico. He also competed for "Cowboy" Bill Watts' Mid-South/UWF promotion.

He made his biggest impact in the World Class Championship Wrestling promotion in Dallas, where he was introduced in 1983 as a Face and as a "pen pal" of Kevin Von Erich. He turned Heel in September 1984, siding with manager "Playboy" Gary Hart. He had a very successful tag team run with Gino Hernandez as The Dynamic Duo. After World Class was merged with Jerry Lawler's Continental Wrestling Association in Memphis, Adams stuck around and also worked for the Global Wrestling Federation in Dallas and other Texas promotions. He made his PPV debut at NWA's Starrcade 1990 in the Pat O'Connor Memorial Tag Team Tournament, teaming with Wrestling/Norman miley as Team United Kingdom in a losing effort against Team Mexico (Konnan and Rey Misterio Sr.).

Adams is also known for having trained wrestlers, his most famous student being "Stone Cold" Steve Austin, and for popularizing the superkick finishing move, which would later be used by many other performers. In fact, he had a run in WCW where he had a small feud with Glacier over the latter's claim of having "invented" the Superkick.

Outside of wrestling, his life was plagued by drug problems such as alcoholism and arrests and he was indicted on a manslaughter charge in 2001 due to the death of a woman in his apartment from an overdose of GHB. While awaiting trial, he was shot dead during a drunken brawl on October 7, 2001.

He featured examples of: