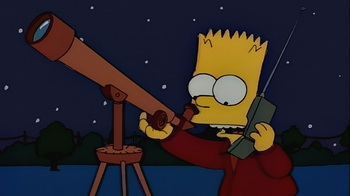 After unleashing an unflattering balloon caricature of Principal Skinner, Bart is forced to help Skinner with his early-morning astronomy... and Bart fooling around with the telescope leads to the discovery of a comet that's on a collision course with Springfield.

Tropes featured in “Bart’s Comet” include:

It's just one upsetting event after another for Seymour Skinner...

It's just one upsetting event after another for Seymour Skinner...