Recap / The Simpsons S7 E18 "The Day the Violence Died" 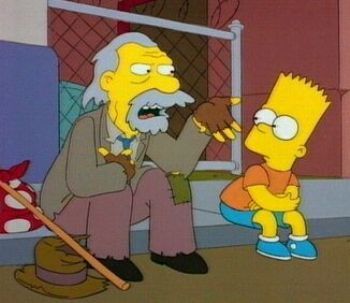 Bart takes home a vagrant named Chester J. Lampwick who claims to have created "Itchy", one half of the popular Itchy and Scratchy, but was left penniless when the idea was stolen. With Bart's help, he successfully sues the studio, but this means that the famed cat-and-mouse duo will be no more.

Bart and Lisa go to the Itchy and Scratchy Diamond Anniversary paradenote Celebrating the establishment of the studio in 1921, not the characters per se, officially "created" in 1928, accompanied by Homer. While they arrive in the middle of the night (before going to see an X-rated film of the characters and a very old drawing at the comic book store), their view of the parade is blocked by a giant crowd. Bart decides to join in the parade instead, but it turns out the whole thing was planned quite poorly, crossing to the wrong side of the tracks. The parade speeds out from the place, but Bart cannot keep pace. He then finds a hobo throwing tomatoes at the float honoring creator Roger Meyers, Sr. and asks him to be more respectful to the man who created Itchy & Scratchy. The hobo then reveals to him that Itchy's creator isn't Meyers but him, Chester J. Lampwick, and that before Itchy, all that cartoon characters did was play the ukulele.

Bart does not believe him at first, so Lampwick shows him a film can entitled "'Manhattan Madness', starring 'Itchy, the Lucky Mouse'", made back in 1919. Lampwick shows the cartoon to Bart and Milhouse at the school, but the nitrate film is suddenly destroyed. Unable to prove their case to Roger Meyers, Jr., Bart decides to hide Lampwick in the Simpson residence. While the rest of the family quickly notices, they have no issue with letting him stay for some time, until he has a fight with Grampa, who accuses Lampwick of not painting his chicken coop in 1947.

Bart and Lampwick then hire Lionel Hutz to sue Itchy & Scratchy Studios for $800 billion. While he claims Meyers, Sr. only created stick figures for characters and stole from others, he carries no evidence unlike the defense (he also has a fight with Krusty the Klown over an unpainted fence). Bart then notes the similarity between the mouse in the film and the one in the animation cel he saw at the comics store. Turns out said drawing also has a message dedicated from Lampwick to Meyers, Sr., dated September 3, 1919. After Lampwick proves his claim, Meyers, Jr. retorts that animation has always relied on plagiarism, but this only leads Lampwick to win the case and the $800 billion (though the judge does say it will likely come down on appeal), a sum that ends up bankrupting the studio, meaning that there will be no more Itchy & Scratchy cartoons (replaced on Krusty's show by a radical right parody of Schoolhouse Rock).

With Meyers, Jr. unable to pay royalties (or to keep his father's brain frozen) and Lampwick preferring to live like a millionaire, Bart and Lisa look for any legal precedent that could give Meyers, Jr. his studio back. Just when they find one, it turns out that another brother-and-sister duo, Lester and Eliza, have proven that Mr. Zip, the U.S. Postal Service mascot, was a plagiarism of the "Manic Mailman", one of Meyers, Sr.'s stick figure characters (at the same time, they also acquit Apu for an indecency charge and manage to reunite Krusty with a former wife). While they are happy to see their favorite characters back, Bart and Lisa are unnerved that a problem could be solved without their help.

"The Day the Violence Died" features examples of: