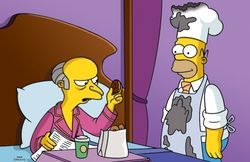 Smithers goes on vacation after having a mental breakdown over not being able to save Burns from being harassed by a drunken Lenny. Homer takes Smithers' place as Mr. Burns' assistant, but all the abuse Homer takes from Mr. Burns causes him to snap and punch the old man in the face, which drives Mr. Burns to be more self-reliant.