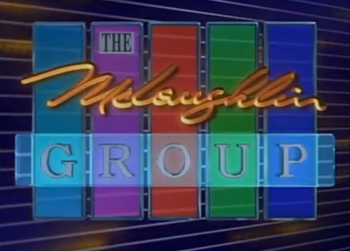 "From the nation's capital, The McLaughlin Group, an unrehearsed weekly television program bringing you inside opinions and predictions on the major issues of the day."
— Original opening announcement
Advertisement:

The McLaughlin Group is a weekly debate program moderated by former Jesuit priest and Nixon aide John McLaughlin. In each episode, he moderates debates on the major issues of the day.

The original panelists were:

As of the series finale, the regular panel consisted of:

The program started on Washington-based station WRC in 1982 and kept going for 34 years, even inspiring parodies and other debate programs. Though it was cancelled following McLaughlin's death in August 2016, the final panel is making an attempt to get back in the game; a revival pilot was released on the anniversary of McLaughlin's death, with Rogan as moderator and new guest panelist Evan McMullin taking the seat he had himself occupied for nearly two years. Otherwise, the panel makeup remained the same as it had the year before.

The McLaughlin Group provides examples of: