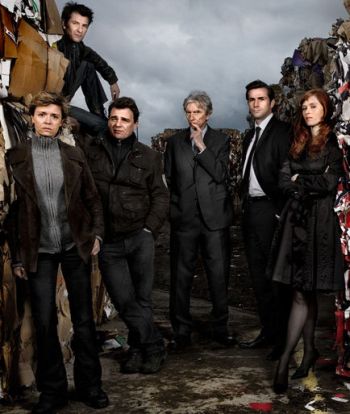 Engrenages (literally "cogs" or "gears", but with implications akin to "wheels within wheels" and "spiralling out of control"), 2005-2020, known in English-speaking markets as Spiral, is a French Police Procedural Crime and Punishment Series set in the less touristy parts of Paris. The three main protagonists play different roles in the French justice system: Capitaine Laure Berthaud represents the police, Maitre Pierre Clément is a prosecutor, and François Roban is an examining magistrate. Clément is written out in the fifth season, and Joséphine Karlsson, previously his Amoral Attorney foil, takes over as a leading character.

The first season deals with the murder of a Romanian prostitute that turns out to have heavy political connections. The second season covers an investigation into a group of North African gangsters. Both of these two seasons also have Mystery of the Week elements, but the third season dumps this in favour of putting the three characters into separate plot arcs: Berthaud hunts a Serial Killer of prostitutes in Paris's former abbatoir district; Clément, disgusted with politics and corruption, attempts to set up as an independent lawyer; and Roban starts a quixotic investigation into a corrupt mayor with very high-level connections. The fourth season dives into the French debate over illegal immigration, with a far-left-wing terrorist group attacking people who they consider responsible for treating immigrants unjustly. The fifth season sees the investigation into the dead bodies of a mother and daughter discovered in a canal uncovering a chaotic labyrinth of street-level crime. In the sixth season, Berthaud and her team investigate the gruesome murder of a young police officer; an ailing Roban has to deal with the suspicious death of an elite graduate student and part-time High Class Call Boy; and Karlsson takes on the defense of a wealthy young man accused of murdering his abusive father. In the seventh season, the characters find themselves investigating the murder of a senior policeman who was shot dead along with the owner of a Chinese restaurant, what initially appears to be an armed robbery gone wrong turns out to be connected with a rather more complex criminal network. Meanwhile, Karlsson attempts to rebuild her life and career. The eighth and final season has Laure's team investigating the murder of an Algerian street kid, while Gilou is allowed out of jail to go undercover with a gangster released at the same time.

After first achieving high critical acclaim in its native France on Canal+, the show was aired (and eventually co-funded) by The BBC in 2006, and has since developed a loyal international fanbase. In the UK at least seems to have paved the way for a great deal of imported European gritty cop dramas. The show has proved so successful that after the third season three more were ordered simultaneously.